Ferdinand Porsche used his technical and creative potential not only for the development of racers and cars, but also applied it to the expedient motorisation of agriculture. From 1938 onward, he developed numerous tractors and haulers and came up with technical innovations.

His carmine-red hauler series with the type designations of Porsche-Diesel Junior, Standard, Super and Master beamed on the tractor market from 1956. A Porsche-Diesel Narrow Gauge Standard T 217 S from 1961 can be viewed at the current Oldtimer Exhibition at the Ferdinand Porsche Erlebniswelten fahr(T)raum. It was manufactured specifically for French fruit and winegrowing enterprises/operations. The import and export company Goetzmann from Strasbourg held the exclusive rights to the tractor. 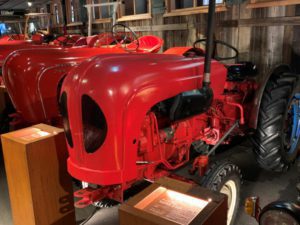 The Porsche-Diesel Standard T 217 S was 20 HP strong, drove up to 30 km/h and had an air-cooled two-cylinder engine. The triple-mounted crankshaft, the radial cooling fan as well as the oil bath air cleaner were special features of the engine. The tractor was also characterised by a low-lying camshaft propelled by a gear wheel and a rotation speed adjustment pedal, which could be operated by foot.

The front portal axle was turned by 180 degrees, moved back and placed at an angle for the manoeuvrability of the hauler and for works on slopes. This shortened the wheelbase and lowered the centre of gravity. Auxiliary equipment could be docked onto the tractor with the standard 3-point hydraulic with external pressure supply. However, special care had to be taken when driving narrow-gauge tractors as they tipped over easily due to centrifugal and impact forces. By 1963, a total of 120,000 Porsche-Diesel tractors were built and sold successfully. Nonetheless, Porsche discontinued the construction of the tractor due to high competition in 1963.

At the »Traktor-Stadl« of the Oldtimer-Museum fahr(T)raum in Mattsee near Salzburg, you can not only see Porsche-Diesel tractors but also Allgaier models and vehicles of the Oldtimer-, Tractor and Agricultural Machinery Club Mattsee. 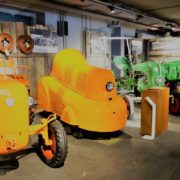 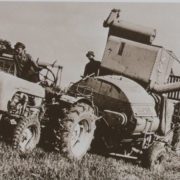