Recently, fahr(T)raum has become the new owner of an original CommerCar estate bus/shooting brake. The yellow bus from 1909 is probably the oldest of its kind and was produced by the Commer company in Luton, England. We have acquired the bus especially for vintage vehicle day trips for club and company outings and bus groups. It is in original condition except for mechanical parts, the paint and lighting. An electric starter was retrofitted in the spring of 2018. A Rolls Royce four-cylinder motor with Claudel Hobson carburettor propels the Commer to a 22 hp output. The Lindley transmission has a pre-selector gearbox connected by a short prop from the cone clutch/flywheel with a direct connection to the differential and chains to the rear wheels. 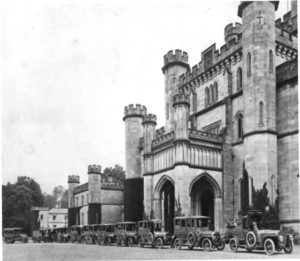 The first owner of the Commer was Lord Lonsdale (Penrith, England). He lost his fortune between the two World Wars and the EC 634 landed back in the factory. In 1955 RG Sloan found the Commer in poor condition in an old barn and restored it over three years. It was on the road again in 1957. Since then, it has been owned by the Sloan hotelier family who used the bus for promotional purposes and travel. During the 1958 London to Brighton Veteran Car Run, the Commer was used as a towing vehicle for the 1902 Benz. Since 1985, it has won the run in its utility vehicle class seven times.

In 2018, we were able to acquire the Commer from David Sloan, son of the last owner. As of now it is ready for its first group outings!

The first traffic rules – displacement and adaptation caused by the a...
Scroll to top