After his career as Technical Director at the Austrian Daimler Motor Co. Austro Daimler in Wiener Neustadt from 1906 to 1923, Ferdinand Porsche was responsible at Daimler-Motoren-Gesellschaft in Stuttgart as a member of the Management Board as well as design manager. After a merger with Benz & Cie to become Daimler-Benz AG in 1926, Porsche’s in-house position was weakened. He left the company in 1929 due to differences with the Board and was on the lookout for a new job. “Porsche’s elaborate lifestyle could not be reconciled with inaction,” writes Karl Ludwigsen in his book „Ferdinand Porsche – Genesis des Genies“.

Thanks to his illustrious career, the 53 year-old engineer was able to choose out of numerous offers from renowned companies. He refused, inter alia, an offer from Skoda and decided on an attractive offer from the Steyr works, which wanted to endow him with the overall technical responsibility of their automobile division.

Originally founded as a weapons factory, the company had manufactured automobiles since 1916 and in the postwar period became a direct competitor to Porsche´s last employer, Austro-Daimler. From 1926 the company operated under the name Steyr-Werke AG. On Friday, 4 January 1929, Ferdinand Porsche started his new job. His closest associate was Karl Jenschke, who had worked as a technician at Steyr since 1922. 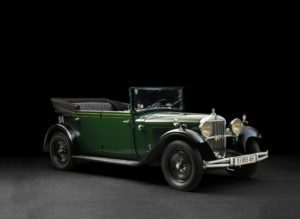 Ferdinand Porsche was greeted with a jubilant welcome on his return to Austria … and rightly so, since he was one of the few automobile designers able to gain a reputation of international significance due to his achievements. He demonstrated his confidence in his new task to Austrians by immediately initiating the construction of a villa on company property in St. Ulrich bei Steyr.

Although the Steyr factory was very well equipped, the number of produced units was too low for commercial success. Porsche, therefore, revamped the existing models and developed two new automobiles – a luxury car and a new subcompact model for the upper middle class, the Steyr Type XXX (later Type 30).
The redesign of the six-cylinder engine was exceptional: eight crankshaft bearings instead of the previous four, valve actuation via push rods and rocker arms instead of an overhead camshaft, a crankcase made of aluminium alloy (silumin). This engine was the basis for all further Steyr six-cylinder automobiles which were built until the beginning of World War II.

The work went well. Between April and October 1929, the team led by Ferdinand Porsche filed numerous patents, i.a. for suspension, clutches and drive joints, engine mounts and the very simplified Type 30 water pump. In addition, Porsche overhauled an existing (made by the engineer and racing driver August Momberger) race car, since Steyr´s original sporting success had diminished in recent years. He equipped the 5000 cc six-cylinder engine with a new cylinder head with two overhead camshafts and a sliding vane supercharger. The car promptly won the 1930 Semmering race. 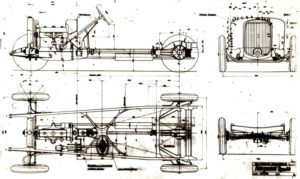 In the autumn of 1929, Ferdinand Porsche not only created a complete exhibition chassis for Steyr Austria for the Paris Motor Show, but also finished two complete cars with different bodies. He drove a third model to Paris himself. His masterpiece achieved an engine output of 100 hp at 3000 rpm.

In 1929 Steyr was able to record a new peak in its production figures – 4986 cars and trucks – and all that not including the Steyr Type 30, which followed later.

Unfortunately, October 25, 1929, “Black Friday” on the New York Stock Exchange, interrupted the company’s success. The Steyr-Werke ´s main shareholder and lender, the Allgemeine Österreichische Bodencreditanstalt, collapsed. Production continued, but sales fell dramatically. Losses increased and layoffs followed. Starting from 1930, the Am Hof credit institute secured the enterprise´s existence. Nevertheless, with half of the workforce (compared to 1928) only twelve cars were manufactured in 1930, including the first four Type 30 automobiles.

The Steyr-Werke Board was forced to enter into a “consortium for sales and purchasing organisation” with its competitor and Porsche’s last employer, Autro-Daimler-Puch. In the new community of interests, behind which Porsche´s former friend and later opponent Camillo Castiglioni stood, his position was no longer tenable. His three-year contract was terminated prematurely after just one year, so he left Steyr in April 1930.

The Steyr works merged with the Austro-Daimler-Puch works in 1934. After the merger, the company changed its name to Steyr-Daimler-Puch AG.