On March 22, the special exhibition of the legendary „Sascha” race car in the Ferdinand Porsche Erlebniswelten fahr(T)raum Mattsee was ceremoniously opened with a vernissage by Oskar Pointecker. 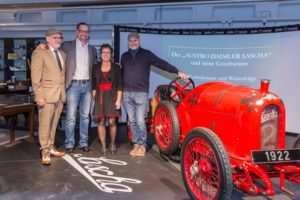 „We do not see ourselves here at fahr(T)raum as museum, but as a living exhibition. Everything is in motion here. All of our cars are street-ready and as of today we are back on the roads after the winter break!” declared Managing Director Jakob Iglhauser as an introduction to the fahr(T)raum concept.

Until September 30, one may not only view the small streamlined red car, but also learn everything worth knowing about it – including technical details and numerous background stories concerning its development. A sound box especially designed for the exhibition produces the original motor noise at the touch of a button. A 10 metre wall with large-format images provides exciting ambience and, on the LED touch screen, visitors can access further information via photos, videos, historical documents and text.

In his speech during the opening, Gerhard Weinzettel, President of the Austro-Daimler Club, explained how the race car received its name: „The eponym and financier of the Sascha car was no lesser than Count Alexander (” Sascha „) of Kolowrat-Krakowsky.” The Sascha ADS-R racing car with an 1100 cc 4-cylinder motor developed 49 hp and yet weighed only 600 kg. It was later also built with a 1500 cc, 2000 cc and a 3000 cc 6-cylinder motor.

Participation of the Austro-Daimler team in 53 races with 22 victories for the legendary „Sascha” car, among others at the Targa Florio in Sicily, were the balance of 1922. Regrettably, racing driver Fritz Kuhn died in a fatal accident on September 9, 1922 during training in Monza – caused by a defectively spoked wheel. Disagreements between the Austro-Daimler Supervisory Board and Ferdinand Porsche followed …

… more exciting stories about the „Sascha”, its ingenious designer Ferdinand Porsche and the legendary races of 1922 now at fahr(T)raum Mattsee!

The best quotes and sayings from Ferdinand Porsche