The nickname “pretzel beetle” is derived from the design of the rear window which, with its two semi-oval panes divided by a central bar, is reminiscent of the shape of a pretzel. The split window was not a design decision, but simply a financial consideration: a convex window pane that would have integrated into the curved rear would have been too expensive for the moderately-priced small car.

In 1934, Ferdinand Porsche was commissioned by the Reich Association of the German Automobile Industry to develop a fuel-efficient and economical car – a “Volkswagen”, later known as the “KdF-Wagen” (Strength through Joy car). In 1938, some pre-production cars were shown at exhibitions, but not yet delivered to customers. The specially built Volkswagen factory was only finished during the war.

After the war ended in 1945 – the Volkswagen factory now in the British hands – the first mass-produced Volkswagen Type 1 were initially delivered only to the United Kingdom and the United States occupying forces and to the Deutsche Post. Production for the civilian population took place from 1948. Technically, the Beetle corresponded to the previous models: central tube frame with base plate made of sheet steel, torsion bar suspension, air-cooled four-cylinder boxer engine, top speed 100 km/h, curb weight 750 kg. Export to the USA after 1950 was a great success and the nickname “beetle” or “bug” came into fashion. In Germany, the term “Beetle” prevailed only from 1961 – in contrast to the VW 1500 notchback model (internally called Type 3). 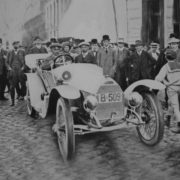 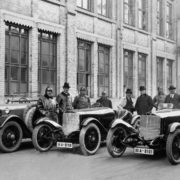