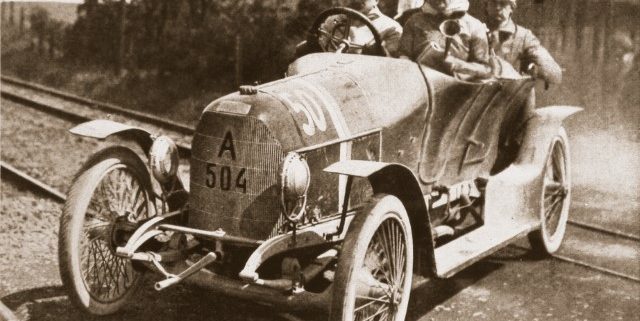 Even when hackney carriages were still the only means of inner-city transport, an ordinance from 1756 stipulated number plates for these horse teams – for a better situational overview. The so-called « unnumbered » were an exception. In Vienna, it was considered particularly genteel to drive such an unnumbered carriage.

From an international perspective, the legal basis of registration plating automobiles and motorcycles in Austria was established relatively late. With a « Regulation of the Ministry of the Interior in agreement with the Ministry of Finance of 27 September, 1905 concerning the enactment of security police regulations for the operation of automobiles and motorcycles », identification plates for motor vehicles were prescribed from 7 January 1906 for the entire Austrian sector of the dual monarchy. The Hungarian half of the empire followed only in 1910. By comparison: in Switzerland, Italy, France, England, Holland and most of the federal states of the then German Empire, registration numbers were already mandatory in the years after 1899. One reason for the late introduction of number plate obligation in Austria was the resistance of the « gentlemen drivers » who found it shameful to have their cars numbered like carriages and to be monitored by the authorities. On the other hand, the Austrian Automobile Club – predecessor of today’s ÖAMTC – regarded the marking as very important, especially in order to locate hit and run drivers … and prevailed.

From 7 January, 1906, the « identification mark » (the term « licence plate » was not used until 1910) had to be affixed to the front and rear of a car or motorcycle in black lettering on a white background – either painted on or on a plate. Each Crown country as well as the police districts of Vienna and Prague were assigned a code letter – without direct connection to the country name/initial: 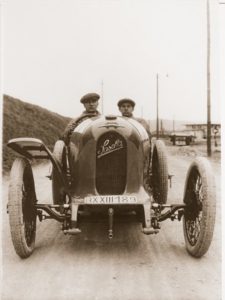 In the picture: ADS-R Sascha race car with Alfred Neubauer and Georg Auer in Wiener Neustadt (1922).

The first change to the number plates took place with the ordinance of 12 May, 1930, in which not only the colours of the number plates were changed according to the British model to white lettering on a black background, but also the system of numbering to country code and then a maximum six-digit number from which the registering authority could be identified (e.g. A 2.170).
With the Anschluss of Austria into the German Reich, the German plates with new identification letters were used from 1939 to 1947, e.g. « W » for Vienna, « Nd » for Lower Danube (Lower Austria).
After the end of WWII, the « Kraftfahrverordnung/ motor vehicle ordinance 1947 », an ordinance from 1937, was reissued. The license plates were now written in white lettering on a black background. The federal states and the cities now received the initial letters of their names: 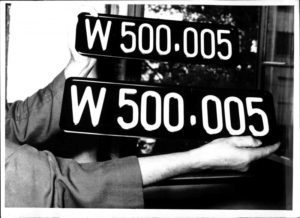 The provincial capitals Graz – G and Linz – L even received their own code letters.

From 1988 onwards, there were many discussions about colours and visibility – including, inter alia, with the artist Friedensreich Hundertwasser, who advocated the retention of the previous white lettering on a black background. Nevertheless, a new decision was made on January 1, 1990: the license plates now had to have black writing on a white (reflective) background, double red lines (Austrian national colours) at the top and bottom for reasons of national identity, and the respective Austrian state coat of arms in colour (slightly raised) between the place-name code and the number.

Bild 1: fahr(T)raum Archiv, Graf Orssich and passanger with signal horn at the Prinz-Heinrich-Fahrt 1910,with arched radiator. They finished 49th. The Lohner-Porsche, a vehicle that was far ahead of its time … just as its inventor Ferdinand Porsche. As early as 1897, Porsche designed a wheel hub motor for the purveyor to the imperial household Jacob Lohner on behalf of the « Jacob Lohner & Co. » imperial coachbuilding works in Vienna. Two years later, the young […] NEW at fahr(T)raum: a Type 335 winch from 1946 During the Second World War, Ferdinand Porsche had to move his « Dr. Ing. h.c. F. Porsche GmbH, Design and Consultancy for Motors and Vehicles » company, founded in 1931 and based in Kronenstraße 24, Stuttgart, due to Allied bombing raids. He relocated his design office classified as […] 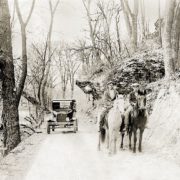 Around 1900, as was the case for millennia, the horse still dominated in the transport of people and loads. Only the utmost upper class could afford private cars. In 1914, people were already crying « Vienna is choking with traffic », although at that time there were only about 4,000 cars in Austria´s capital. Today, in Vienna […]