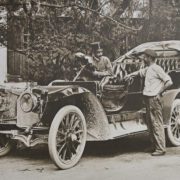 110 years have passed since Ferdinand Porsche developed the first purely petrol-driven car for Austro-Daimler – the AD Maja 28/32. In September 1906, Emil Jellinek, head of the Austro-Daimler company, brought in Ferdinand Porsche to Daimler in Wiener Neustadt as a new development manager and technical director for the construction of AD Maja. After only […]