Ferdinand Porsche, son of the master metalworker Anton Porsche, born in 1875 in Vratislavice nad Nisou (Bohemia) and later famous as a universal technical genius, was undoubtedly far ahead of his time. He was already tinkering with electric drives during his apprenticeship. He invented the first e-bike out of necessity. In 1893, he started his first job as a mechanic at the Bela Egger United Electricity Company in Vienna. After work, he ran to the Technical University and listened to the lectures on electricity as a “sneak listener” – he was not officially enrolled at the university. He had to walk the distance between home, workplace and university. For the restless and ambitious young Porsche, this seemed to cost too much precious working time, which literally fell by the wayside. Then he discovered an old bicycle in the corner of the stairwell of his apartment. He bought the battered vehicle from its owner, repaired it, lubricated it and repainted it. To make it even faster and easier to overcome the not inconsiderable gradients in Vienna, it occurred to him to build ​​an electric motor. Thought, done! He found an octagonal piece in the company, leftover from a test assembly, and built it onto the now shiny black bike. Ferdinand Porsche’s electric bicycle, which he called “Octagon” because of the octagonal rear wheel motor, quickly became a key topic of conversation throughout the company. The owner, Bela Egger, also became aware of the metalworker´s son. “A clever chap, I have to admit. I think I’ll have to watch him closely.” The course for his great career has been set…

Porsche’s faith in electromobility has now been revived at fahr(T)raum. Although one must no longer get from A to B as quickly as Ferdinand Porsche, the Salzburg Lake District invites you to take a relaxed ride through its countryside – and all this in the fresh air without noise. Fahr(T)raum continues young Ferdinand Porsche´s inclination with its new e-bike hire service. From May, e-bikes from Köstendorf´s “Top in Form” company can be rented for 24 hours or even for several days (€35.00 is the daily rate per started 24 hours). Bicycle helmets, locks and child seats are also available for rent.

The International Day of the VW Beetle is imminent. On 22 June, one of the world’s most-sold cars is being commemorated. Since 1995, millions of VW Beetle fans have celebrated the popular VW Beetle on the 22nd of June. This day was initiated by Alexander Gromow, an expert of the VW scene and cofounder of […]

It was with good reason that Ferdinand Porsche was called a universal genius. In addition to automobiles, racing cars, prime movers and tractors, he also became renowned for his inventions in the aviation sector. As early as the beginning of the 20th century, he was building aviation engines. For example, for the first manoeuvrable blimp, […] 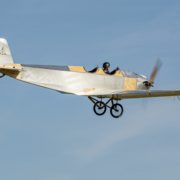