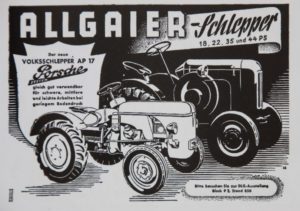 Ferdinand Porsche not only designed sports cars, he also played a significant role in the mechanisation of agriculture. This included the development of the „Volksschlepper” (“People´s Tractor”) from 1944 and its further developments resulting in the universally applicable AP-17 („System Porsche”) tractor built by the Allgaier company.

Particularly memorable is the bright orange P 312 – the „Brazilian tractor” for use on coffee and sugarcane plantations due to its striking design. The construction of the P 312 was based on the AP-17 with oil-hydraulic clutch and Porsche 5-speed gearbox. 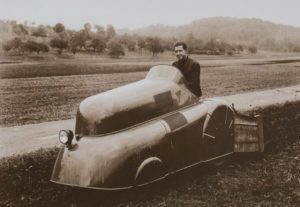 The narrow gauge tractor was not only remarkable for its streamlined build but also its technical details: 25 hp, a two-cylinder four-stroke petrol motor for methanol and petrol operation, a rotary hoe with fixed blades mounted with 3-point hydraulic linkage and a working width of 100 cm. Everything was set up for the requirements in the plantations. (The all-enclosing smooth sheet metal cladding including the mudguards repelled branches and prevented damage to plants, additionally the track width corresponded to the planting.)

The Porsche family began to establish contacts with government agencies in Brazil as early as 1948 in order to get a licensee for their Volkschlepper. The so-called „coffee train” with its rotary hoe was even tested by the state examination centre in Campinas (Sao Paulo) and rated „very good”1. 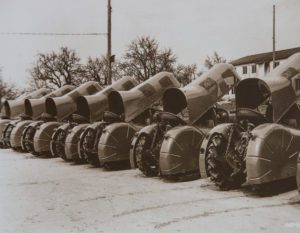 Intensive negotiations and technical further developments after numerous field tests finally led to a contract with the Alrico Ltda. company in Rio de Janeiro in 1953, which wanted to take over distribution in Brazil. The first order was for the delivery of 1,000 tractors. In 1954, the first 220 were built in Friedrichshafen – 200 of them were packed in wooden boxes and shipped to Santos, Brazil. Unfortunately, local disembarkation conditions were catastrophic: customs and import formalities delayed the clearing, Alrico’s financing was not in line with contractual terms and equipment needed to assemble the tractors was missing. Thus, tractor sales were considerably delayed and no more than the 200 tractors were sold.

One of just a few restored orange P 312 tractors, in addition to numerous other Porsche tractors, can be seen in our Traktor Stadl at fahr(T)raum Mattsee!

1 The examination summarises as follows (translation from Portuguese):

„With regard to the entire device, we can say from all the tests that have been conducted that it performs well in tilling. The tests proved that in soils infested with weeds of all kinds, even with Graminha (a particularly troublesome weed), the performance can be described as very satisfactory in the case of rapid work and economical consumption. The tests in the coffee field, which is planted in even rows and normally sloped ground, prove that the armoured tractor can even work under the coffee trees without damaging the plants, which means that only a whole small area around the plant remains to be performed by manual labour. The work proved to be very effective, and the area was completely worked. “

More Information in our blog article Ferdinand Porsche and his tractors.