Baptism of fire a success 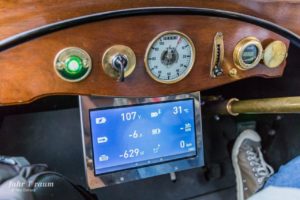 The project is completed. Under the direction of mechanical engineer Siggi Stadler from Prien, fahr(T)raum´s 1911 “Kaiserwagen” has been implanted with a new heart – an Italian 30 Kw (approx. 40 hp) electric motor and lithium ion/iron phosphate batteries. The concept, development and installation of the electric drive was executed by the German company E-Car Tech. The legendary veteran car mastered its baptism of fire brilliantly at the traditional Salzburg Gaisberg hillclimb on May 31 in the pouring rain. Befitting one´s social status and thoroughly in keeping with the times, Ferdinand Porsche‘s grandson Ernst Piëch tread vigorously on the accelerator of the new electric motor.

The original owner, Emperor Franz Josef of Austria-Hungary, would have been happy with the successful implementation of the multi-week renovation project. After all, he wanted a car that did not stink or scare horses. The magnificent sedan, which was given to the Kaiser by the Austrian Automobile Club in 1911 for his 81st birthday, was powered electrically even back then. 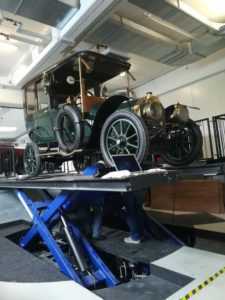 The construction of the “Kaiserwagen” was based on Ferdinand Porsche´s last pre-war model at Austro-Daimler, the type “14/28 – touring car for city and country”. The body was constructed by the Viennese coach manufacturer Jacob Lohner. With its 20 hp motor, the car managed a sensational top speed of 70 km/h. Striking details: in order to comply with the principle “An Emperor bows his head to God alone”, the roof height was increased to 230 cm. Thus the emperor was able to enter his vehicle upright even with decorated headgear. Special features of the time included the electric cigar lighter extending into the passenger compartment, a hose intercom system for communication with the chauffeur and small holy water cisterns on the doors.

With the collapse of the monarchy, the imperial automobiles were given away to leading field marshals. Thus, the “Kaiserwagen” fell into other hands, was first provided with an Austro-Fiat motor in 1932, used as an advertising vehicle for a coffee company and finally rediscovered in 1956 by the journalist Henry Goldhann and equipped with the original engine. After 30 years, an American collector bought the car and later it ended up in a museum in the USA.

In 2003, fahr(T)raum owner Ernst Piëch managed to bring the “Kaiserwagen” home. It can now be seen at fahr(T)raum with its new electric motor and, of course, as with all vehicles of the vintage car exhibition in Mattsee, is roadworthy and can be booked for excursions.

A Porsche tractor for Brazil – the P 312
Scroll to top